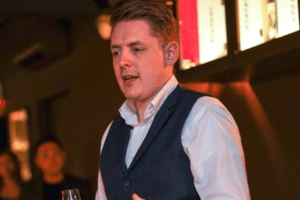 Scott Adamson is the Global Brands Ambassador for Tomatin Distillery. This varied role sees him travel all across the world promoting Tomatin Single Malt Scotch Whisky, along with our other brands. When he is not travelling, Scott’s time is spent in cask selection and blending giving him a front row seat in product development. His passion and knowledge will ensure you have both an enlightening and entertaining experience with our award winning single malts.

Scott was born in Inverness and brought up in Evanton, Ross Shire. Whilst studying for his Honours degree in Scottish History he managed to secure the position of ‘Research Intern’ within Tomatin Distillery. It was then he realised his natural enthusiasm for history lent itself well to the Scotch Whisky Industry and upon graduating, he joined Tomatin as ‘Regional Sales Manager’, covering a large number of European markets.

Scott worked and lived onsite for 4 years, and following a brief spell at Whyte & Mackay, he realised his true passion lies within cask selection and whisky creation. He re-joined Tomatin in 2018 as Global Brands Ambassador, the first role of its kind within the company. In 2021 he won the Scotch Whisky Brand Ambassador category at Whisky Magazine’s prestigious Icons of Whisky Scotland 2021 awards.